Elephant in the Room

How many live in yours?

We’ve all been there. In the room. Any room. And we’re keenly aware of the elephant … in the corner … on the couch … behind the desk … wherever. We know we don’t want to talk about it (otherwise the elephant wouldn’t be there) and we’re hoping nobody else does either. Or perhaps we’re hoping that someone else will bring it up to get us off the hook. That way we won’t be blamed for mentioning it and we can claim we had no idea it was even there.

But most likely we’re praying that nobody else will even notice the elephant and that the elephant (seemingly all on his own) won’t find a way to sneak into the conversation. You know he wants to. That’s his job. But he’s not allowed to. There are some unwritten rules somewhere that forbid the elephant from making himself known. Seems like that would totally destroy the purpose of the elephant.

But sometimes he finds a way of surreptitiously stumbling in the corner and then he is suddenly noticed … and it’s all over. 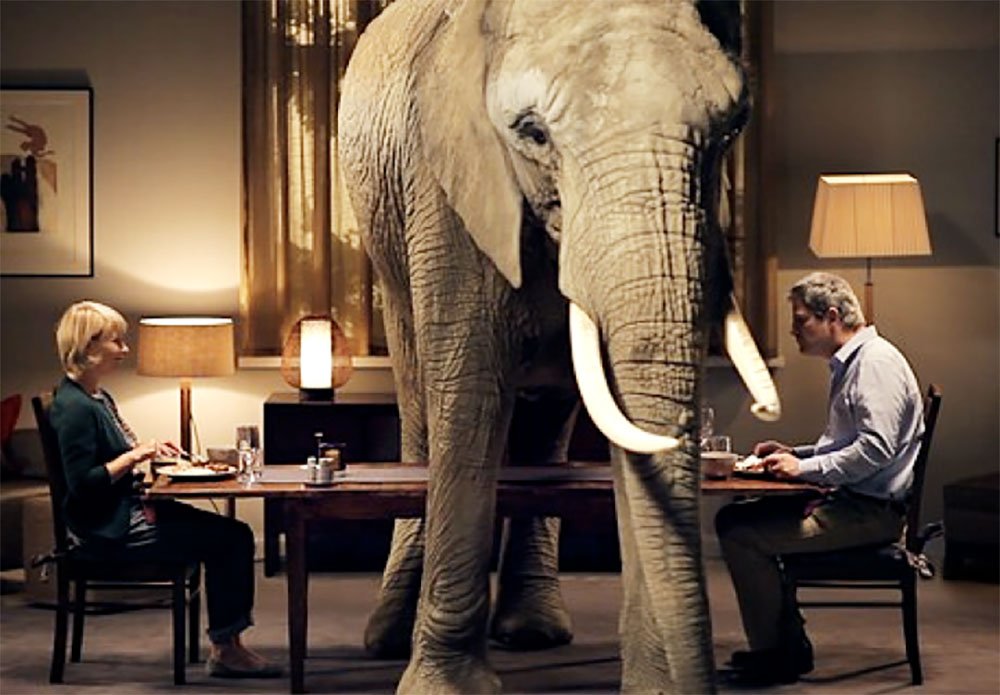 Curious thing about these elephants – they have this amazing way of fitting into any environment. Whether it’s a room, car, bed, closet, elevator … it’s magical. No matter where I go, my elephant fits in fine. Even when I’m out for a walk he’s lumbering behind … a pachyderm on cat’s paws.

And since there seems to be an elephant in every crucial (and sometimes not so crucial) moment in my life, I’m sure that there must be an elephant in almost every scene in every story, every movie or play. Only problem is that we can’t see them. They are not written.

Yet what these elephants contain is perhaps potent and potentially explosive information. It is what the scene is all about, or trying to be about. The elephant is not the subtext. That is too simple. The elephant is what stimulates or creates the subtext. It is the trigger, the ignition, the fuel all rolled into one.

The elephant is quite clearly that topic or issue that is hanging in the air, unspoken, unaddressed, unacknowledged. It’s the thing you don’t want to bring up. And you are hoping no one else will. You know it’s there, and in fact it’s in the room because you brought it. And you know that the more you ignore or deny it, the bigger it gets. And you know that other people in the room know that it’s there. They can feel it. And most of them are not going to talk about it either. That’s the deal. That’s what keeps the elephant alive and thriving. In fact, I think that every relationship has an elephant or two, or more. Did you know that a herd of elephants is called a parade? Perfect. That’s what it feels like sometimes – a parade of elephants. It’s hard to ignore a parade.

It is quite clear that the only reason we don’t bring up our elephants is because of fear. Fear keeps them hidden. And these fears trigger the subtext. The subtext is simply what we would like to say or do but we can’t because we fear that the consequences would be disastrous. Sound familiar?

That’s the chaos we all live in.

That’s the chaos that all of our characters live in.

That’s the chaos that drives every scene.

Lately I’ve been asking writers, directors and actors who are in the process of developing stories or presenting scenes, a simple question: “What’s the elephant in the room?” And the reactions I have been getting are fascinating. Very often I am hearing, “Wow, I don’t know, let me think.

And I’m beginning to realize that the reason they don’t know is because they haven’t really thought about it. And why is that?

Whenever we’re in a moment of crisis, it’s much easier to focus on the events that are happening around us. We don’t want to look beneath the surface. We do our best to keep the subtext hidden and totally ignore the parade of elephants. The same behavior occurs when we (writers, directors and actors) look at our dramatic material with the clear intention of understanding what is really going on. We focus on the obvious. We look for easy answers and make judgments based on text, behavior, actions, and consequences. Yet, what we need to do is mine the subtext and identify the elephants.

I was consulting on a feature project a few years ago and the writer patiently explained to me that her script was very special because it was all “driven by the subtext.” And in fact she felt she required special actors who knew how to play subtext in order for the film to be successful. I avoided a deeper discussion of subtext (which every good story contains) or her idea of ‘special’ actors until I read the script. The script appears to me to be vague and unspecific in terms of character motivation and intention. So I asked her, “What is your story really all about? What is the subtext?” Her response was a very patient and thoughtful definition of subtext, as if this concept was new to me. And when I pressed further and asked her about the subtext in a specific scene she seemed a bit baffled and could only reply with, “Can’t you feel it?” Further into the consultation it became clear to me that she could definitely feel the ‘subtext’ within her characters but was totally incapable of identifying or characterizing that subtext.

This experience made me more keenly aware of how we are all engaged in this awkward dance with subtext and the elephants. We know they are there. We know our scenes and our stories rely heavily on powerful subtext and stubborn elephants. And we also know we can’t write this explicitly in a screenplay (then it would become a novel). And too often we are hoping our viewers will just “get it.” Especially if we don’t get it – if we can only ‘feel’ it.

Sometimes I think that we are almost as afraid of the subtext and the elephants in our stories as our characters are. Perhaps we’re afraid of discovering what they really are. Or perhaps we’re not capable of digging that deep. I know that there are many directors and writers and actors who are afraid that a deeper truth will be revealed – that they do not know their story and characters as well as we expect them to. And this is another elephant – a new fear, generating new subtext, within us. And we press forward hoping no one will notice.

← The Battle Against Fear Four Reasons Not to Rehearse →